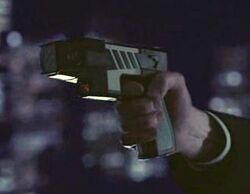 Mimicking the skill to use a taser
Ability to:
mimic the capabilities of others
Character(s):
Shelton Bishop

Capability Mimicry is the ability to mimic the skills and knowledge of a nearby individual.

This ability means that the characters who possess it can mimic any skill or knowledge from anyone within a specific radius, but only skills and knowledge gained naturally. They cannot mimic abilities or anything gained through an ability. The ability is deliberately activated, and once something is mimicked it is kept until exchanged for something else. The ability's radius is small, originally, but will grow the longer a person has the ability. The amount of control over the mimicked knowledge or skills will also grow, with time.

Retrieved from "https://chataboutheroesrp.fandom.com/wiki/Capability_Mimicry?oldid=61644"
Community content is available under CC-BY-SA unless otherwise noted.