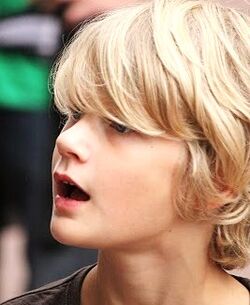 Cody Calwin (full name Cody Manning Calwin) is an evolved human and the eldest child and son of Jack and Tracy Calwin. He was born a few weeks early, which led to his vocal cords not developing properly, resulting in him being unable to speak. Cody therefore uses sign language to communicate with his friends and family. Later in his life, Cody will marry Ishi Nakamura Jnr and will be a father of three: Ella, Isaac and Whittaker Calwin.

Cody was born on the 10th of February, 2011. He was the first child and son of Jack and Tracy Calwin. Since a child, he had problems communicating, due to his vocal cords not having developed properly in the womb and also due to his have being born premature. His communication was absent until he learned sign language. As a baby, he displayed his evolved human abilities at a very young age, and displayed his ability to manipulate other abilities first, on both his mother and father, augmenting and negated their abilities.

At the age of five, his father, Jack, died. Cody travelled to the morgue where his father's body was stored, and found Lauren's ring which contained an ability. He augmented the ability in the bracelet and sent multiple pulses in order to restore his father's life, which he did successfully. Cody was happy and glad that he was able to save his father, how it remains unknown to how the ring got to the morgue.

At times when Cody has travelled to the future, it was seen that Cody grows up to be a handsome young man. He had a different future before however, as he grew up to become bitter, spiteful and angry, due to an operation his father arranged for him to have to improve his vocal cords, but failed. This future changed, as the alternate future Cody travelled to the present day, convincing his father to change his mind about the operation. Events have now changed and Cody's future has altered for the better. He marries Ishi Nakamura Jnr, and has three children with her.

Whilst in the future, it is shown that Cody's abilities have seemed to have grown rapidly, making him very strong. In a fight alongside with his girlfriend (at the time) Ishi, they were almost indestructable when fighting against five evolved humans with powerful abilities. After attacking one, future Cody deleted his abilities, showing that in the future, Cody's abilities will grow and evolve even more.

This ability allows him to control other abilities. This is the ability he first manifested, and he can use it well. He can manipulate abilities in various ways, from weakening them to amplifying them or switching them off completely. Usually he has to clap to deactivate abilities except his own, and to amplify abilities he touches people and lets off a white spark, however this is not always needed. As a result of this ability Cody can also amplify his own ability, and his brain power to make him smarter. Usually he uses hand movements to manipulate powers but he can also do it mentally.


Cody has been shown to use this ability a lot, and unusually is able to manifest latent abilities early, as shown when manifesting Daniella Millbrook's abilities upon physical contact. It seems that the easiest task for him is to amplify abilities, and negating them has shown to be difficult if the person has great control over their abilities. Cody has shown that he can also sense abilities, being able to detect what abilities a person has and even sense the strength of them and their combination. He describes this strength on a scale of 1-5, as shown:

Cody's next ability is to move at a superhuman speed. This allows his physical movements to be faster than normal, increasing his speed and even allowing him to jump further and higher than normal, making him able to reach objects he usually can't. As a result of this ability, Cody is able to see time slower than usual and is therefore not affected if time is stopped. He is also able to supercharge this ability.

Cody has shown that his energy levels remain the same when using this ability, meaning that this ability provides him with more energy when running faster. He is also able to walk across water, meaning that he can even run across the world if he wanted to. With this ability, he can also pass it on to others when touching them. He has also shown to augment this ability, giving him the ability to glow. This allows him to practically move from one location to another instantaneously, and travel through time.


It has been shown that Cody can perform many tasks with this ability. He is able to manipulate sound waves in order to make them absent and decrease or increase their volume. He is also able to manipulate sound to create a sonic clap, which appears as a shock wave emitting from his hand. This ability also allows him to absorb sound and sonic energy, giving him some immunity to sonic abilities. On some occasions, Cody has performed a 'siren song', which allows him to manipulate sound in order to attract people towards him through music, also occasionally placing them in a trance. Unusually, Cody has shown that he can produce a shield of sound around him, called a sound bubble. This isn't very strong but can absorb most of the impact from physical attacks.

Cody inherits his blonde hair colouring from both of his parents and has blue eyes like them too. He has round chubby cheeks and is always smiling or laughing. As he gets older Cody's hair will gradually darken until it is thick and brown, and he will grow up to be a handsome man. His looks will be appealing and attractive, and he will use these in his work as a part-time male model. He will take after his father in terms of being tall and having a strong build. When he is an adult he will be taller than his father and one of the tallest in his family. His children will also inherit some of his physical appearances.

Cody is a name which has various meanings from different backgrounds. One of these is a Gaelic name meaning "son of Oda", but other backgrounds have different meanings. The name is also translated as being a "helpful" or "son of a helpful man". This could refer to how Cody is a helpful person, and how his father also has helped several others. The English meaning of the name is "cushion". His middle name Manning means "son of a man, hero" and this could refer to how his father has saved others and can be considered as being a hero. His surname, Calwin, is French and means "bald".

Retrieved from "https://chataboutheroesrp.fandom.com/wiki/Cody_Calwin?oldid=57401"
Community content is available under CC-BY-SA unless otherwise noted.