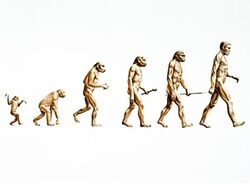 Evolution manipulation is the ability to change and manipulate the stages in evolution.

Cadel and Karyn will be able to manipulate the stages of evolution in any plant, animal or human. They will be capable of changing an evolved human into a non-evolved human, and reversing this by changing a non-evolved human into an evolved human. Karyn will do this before she is born, removing her younger twin's abilities, and will later return them. They could both take humans and other animals backwards or forwards in evolutionary stages as well as plants. The ability could also be used to take evolved humans into the next step of an evolutionary change, though what this next stage could be is unknown.

Retrieved from "https://chataboutheroesrp.fandom.com/wiki/Evolution_Manipulation?oldid=61279"
Community content is available under CC-BY-SA unless otherwise noted.